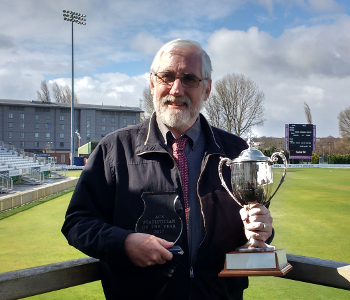 Charles Davis was presented with the Brooke-Lambert Trophy for the Statistician of the Year at the ACS’s AGM in March 2018.

Charles is probably best known for his diligent tracking down, over many years, of original scorebooks or scoresheets of every Test match ever played (or as many of these as have survived), and using them to re-score each match, to produce detailed ball-by-ball scoresheets of every game. To date he has posted newly-detailed scores of every Test from 1877 up to the early 1960s, including his detailed ball-by-ball re-scoring of over 330 of them. He makes the results freely available on his website, Z-score’s Cricket Stats Blog, and uses them to derive a host of new details and records.

In addition, Charles has pioneered the opportunities created by new sources of online information – such as online ball-by-ball Test match commentaries – to create statistics on previously unexplored areas. By painstakingly combing through these sources he has produced completely new statistics and analysis on subjects like missed catches and stumpings (by country, by fielding position, and by named wicketkeeper), and on the success rates of appeals (by country, by bowling style, by named bowler and by named umpire).

These are just some examples of Charles’s varied and original approach to the derivation and interpretation of cricket statistics. There’s a whole lot more on his website, and in articles that he produces for publications such as the online Cricket Monthly.

But Charles is not just a delver into the scores and records of Test matches. In earlier days he was a biohydrometallurgist with the Rio Tinto mining company, and he also plays a mean piano. In addition, the blurb of one of his print publications tells us that he is ‘quite possibly the only cricket statistician to have his work quoted in both the New York Times and the Australian Federal Parliament’. One of his books, called The best of the best, contains what is referred to as a statistically rigorous rating system for cricketers of all types and across all eras, and he has also extended this analysis to other sports in order to produce an answer to the question ‘Who is the greatest sportsman of all time?’ It will come as little surprise to today’s audience to learn that by this process Don Bradman emerges as the greatest-ever cricketer; it will probably be not much more surprising that the Don also emerges as the greatest in all sports, well ahead of the likes of Pele, Jack Nicklaus and Michael Jordan.

Charles is only the second Australian to receive the award over its 32 years, following in the footsteps of Ray Webster 20 years ago, and travelled from his home in Melbourne to receive the award in person. He has to date visited over 80 countries and has travelled to the top of Mt Kilimanjaro and the base camp of K2; but he has never been to Derby before. So that’s another item off his bucket list, then …