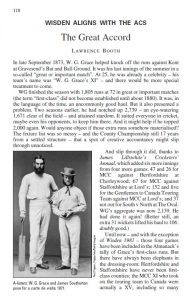 The ACS is delighted that, following discussions last year with the editor of Wisden Cricketers’ Almanack, Lawrence Booth, the ACS and Wisden now have a shared approach to the compilation of statistics relating to first-class cricket. The result is that statistics recognized by the ACS and the records section of Wisden 2022 are now in alignment. The ACS is very appreciative of the initiative taken by Mr Booth in raising this subject with us last year and we are pleased we were able to be of assistance.

A press release marking the publication of the Almanack explains:

Wisden has adopted the statistics used by the Association of Cricket Statisticians and Historians, affecting the career figures of several prominent players. The ACS have argued that ten matches which Wisden previously counted towards W. G. Grace’s first-class record were not, in fact, first-class – reducing his tally of runs from 54,896 to 54,211, and his haul of wickets from 2,876 to 2,809. Jack Hobbs, meanwhile, gains two hundreds, moving from 197 to 199, because the ACS ruled that some games played in 1930-31 were first-class. Herbert Sutcliffe and Wilfred Rhodes are also affected.

What is the ACS?

Who is the oldest man to hit a Test match century? What is the most expensive bowling analysis in first-class cricket? Does a match start with the toss, the call of ‘Play’ or the first delivery?

If you are intrigued by such conundrums, or if you’re interested in the origins and history of the game, you’ll find a group of like minds in the ACS. Founded in 1973, we are an international body represented in over 20 countries, and our members include most of the world’s leading cricket statisticians and several of its most accomplished historians and biographers.

Our principal purpose is ‘to promote and encourage research into the statistical and historical aspects of cricket throughout the world at all levels and to publish the findings’. Members of the ACS have significantly contributed to a wider understanding of the game and have led the way in uncovering many biographical details of first-class cricketers.

We have around 850 members all over the world. Membership is open to everyone – all you need to join us is to share our interest in the statistics and history of the game.

Members receive our quarterly journal, The Cricket Statistician, and an annual voucher, currently worth £8, towards the cost of our printed publications. They are entitled to a 33% discount on subscriptions to the Cricket Archive website and to the CSW cricket database. Members can also join our email forum to share information, ask questions and chat about topical cricketing issues. Details about the email forum and discounts are available in the Members Area; any member who does not have the password for this page should contact webmaster@acscricket.com.

We publish a range of titles which are available in the ACS Online Shop.

If you are looking for an answer to any question about cricket, seeking clarification about a particular record or feat, or searching for information on a team or a particular player, please send an email to secretary@acscricket.com and the Secretary will point you in the right direction.

The ACS has launched a Members’ Marketplace to facilitate members selling cricket-related printed material (books, magazines, scorebooks, scorecards, etc) to each other. The marketplace will operate on a similar basis to small ads, so any transaction will be between the buyer and the seller; the ACS will not act as an agent, will take no fee, and will not guarantee the description or condition of any items. Instructions for using the marketplace are on the webpage.
This is a trial, and will be reviewed in a few months to see whether there is a demand for the service and how smoothly it works.

The ACS International Cricket Year Book 2022 is now available, and for the second year running the price has dropped, reflecting the fact that less cricket was played in 2020-21 because of the pandemic.

Our latest book in the Lives in Cricket series is Andrew Radd’s George Thompson: A Very Useful Man, the story of a ‘copper-bottomed local-sporting hero’ who propelled Northamptonshire into the County Championship before the First World War.

Among our other recent publications is Cricket’s Four Epochs: How cricket reflects civil society, Eric Midwinter’s study of how the style and timbre of cricket change along with the prevailing political economy and culture. It is also available in a discounted package with Andrew Hignell’s Cricketscapes.

The Overseas First-Class Annual 2021 covers the pandemic-disrupted season of 2020-21, and First-Class Matches: West Indies 1999/2000 to 2006/07 completes our coverage of previously ‘Hard to Get’ first-class scores from the West Indies.

All books published in the last year which remain in stock appear under Latest Publications.

Many earlier publications are available in the online shop, including extra copies of the ACS Journal, The Cricket Statistician. And we are reinstating a selection of online book reviews from The Cricket Statistician, starting with an advance review of Crickonomics: The Anatomy of Modern Cricket, by Stefan Szymanski and Tim Wigmore.

If you need to get in touch with ACS Sales, their contact details are here.

A full recording of the meeting and the Minutes are both available in the password-protected Members Area.

The Brooke-Lambert Statistician of the Year was Julian Lawton Smith, for his work on the Minor Counties Project, and the two winners of the inaugural Peter Wynne-Thomas Award, for members who, by their own voluntary efforts, have provided help or other benefits to the wider membership in particular ways over a lengthy period, were John Ward and Harry Watton.

The ACS has created a Statistics Logistics sub-group drawn from the ACS committee, members of the Association, and members of the scoring and umpiring community, to discuss and advise on the recording or calculation of cricket statistics.

The group’s answers to an initial batch of 17 questions, and explanations of how they reached their decisions, are available in a PDF document here.

The group has also discussed how to treat statistics for the ECB’s new 100-ball competition, after consultation with ACS members, ECB officials, Wisden and Cricket Archive. Their advice on how to handle statistics for The Hundred is available in pdf form here.

The ACS has started work on a series of pen portraits of players who appeared for county 2nd XIs but never appeared in 1st XI cricket.

We are placing the initial batch of entries on Glamorgan players online, and you can find them via this page. If you have additional information on these players or others not yet included, or you would like to help compile a listing for another county, please email secretary@acscricket.com.

Can you help with our research projects?

Stuck at home, unable to visit a cricket ground, and looking for something to do?

The ACS has launched a series of collaborative research projects, and we need our members’ help.

The internet provides access to a huge number of local newspapers, without having to go to the library, so you can get involved even if you’re self-isolating. Among the subjects we want to work on are women’s cricket (compiling a definitive list of major domestic matches), league cricket, national competitions, research into county committees, scorebooks (where are historic scorebooks kept?) and several more. We’re open to further suggestions!

For more details on what we’re planning and how you can help, read Peter Griffiths’s proposals which include contact details for the project co-ordinators. Links to the first results are on our Research page.

If you are not yet a member of the Association, we very much hope that you will consider joining. Click on Join the ACS and follow the links and instructions there.

We have recently added the option of digital membership, for those who prefer to receive the quarterly mailing in electronic form.