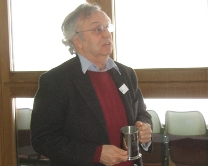 The second winner of the Don Ambrose Memorial Prize, for the best article published in The Cricket Statistician in 2012, was Keith Walmsley, for his article ‘Firsts of the Season’ in the Autumn issue.

Keith, a regular contributor of statistic-based articles to the Journal and the Statistical Officer of the Cricket Society, looked at the ‘seasonal firsts’ – the first to 1,000 runs, to 100 wickets, and even to the Double, though the latter feat was last performed in 1988 and had not been achieved by an Englishman since 1967. He said that he had been inspired to write the article by Nick Compton’s feat of very nearly reaching 1,000 first-class runs by the end of May 2012 – another achievement which had not been achieved since 1988.