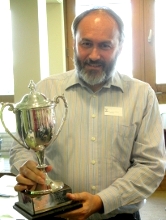 Andrew Samson was named Statistician and Historian of the Year for 2013, and the ACS committee were delighted that he flew over from South Africa to receive the trophy at the 2014 AGM in Derby.

Andrew’s most notable achievement is his creation of a database containing scorecards of all first-class, List A and Twenty20 matches, and his ability to run queries and extract pertinent information while scoring. Through his versatility, he has raised the standard of the media scorer/statistician to a new level: combining diligent pre-match preparation with an ability to spot the interesting and unusual, he offers statistical observations that genuinely inform the listener, adding context and insight. His work shows how statistics can be part of the story, not just a footnote to it. But, like a good umpire, he gets things right without trying to become the centre of attention.

If we want the public to get a good impression of what a cricket statistician is and can do, then Andrew would be the role model.