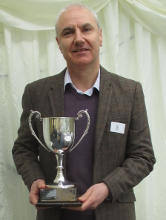 An active member of the ACS since the 1980s, Mick Pope joined the committee in 1994 and served until 2007. During his time on the committee he was marketing manager for four years.

A meticulous researcher, it was Mick who found the full score card of the famous Sheffield and Leicester v Nottingham match in 1826. This discovery gave us the earliest instance of a full bowling analysis. In recent years Mick has written eight articles for the Journal, in one of which he reproduced Old Ebor’s forgotten interview of Charlie Ullathorne. Another article brought to light the history of the scandals that marred the life of C.F.Buller.

Enthusiasm for cricket, diligent research and attention to detail are all essential qualities required by any serious cricket researcher. Mick possesses these in abundance which makes him such a worthy winner of the trophy for the Statistician of the Year 2014.