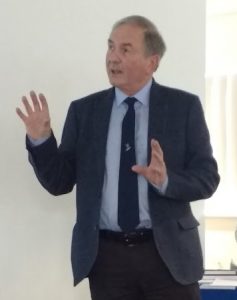 Nearly all those present will be aware of the ACS Minor Counties project. The end product of this has been the publication of an annual covering each of the 20 seasons from the inauguration of the Minor Counties Championship to the start of the Great War, plus a summary volume covering the whole period. This project was the brainchild of Tony Webb and has been one of the largest funded by the ACS. Tony’s herculean efforts were rightly acknowledged when he was awarded the title of Statistician of the Year for 2005.

Sadly, ill health forced Tony to stand down as project leader after the production of the 1906 annual and Julian Lawton Smith volunteered to take over. I can pay no bigger compliment to Julian than to say that the standard of his annuals has been every bit as high as those edited by Tony. Julian has proved to be a highly effective boss, not just in terms of man-management but also in his willingness to do the necessary donkey-work when volunteers have been thin on the ground. For instance, if I needed reports from the sporting press of the time, Julian would happily make the trip to the British Newspaper Library and obtain photocopies of the relevant articles. It was only when working closely with Julian that I really came to appreciate exactly how time-consuming and painstaking leadership of the project actually was.

I turn now to the summary volume – or the ‘doorstopper’ as I refer to it. In the absence of any other enthusiasts, I volunteered to generate much of the content but made it very clear that I am simply not management material. Julian once more stepped up to the plate to oversee the production of the doorstopper. He did an excellent job in marshalling his team of statisticians for one last push in order to generate what we like to think is a coherent and valuable volume. He was a pleasure to work with, always ready to give knowledgeable advice but also open to suggestions from myself and all the other contributors. Julian was generous with praise when he liked my product but, when he wasn’t quite so keen on what I had written, his constructive criticism was expressed in such a tactful way that it did not rouse my notorious artistic temperament.

Julian has now retired with honour, intending to press on with his long-delayed history of Oxfordshire CCC. He thoroughly deserves to be named Statistician of the Year for keeping the Minor Counties Championship front and central in the work of the ACS.